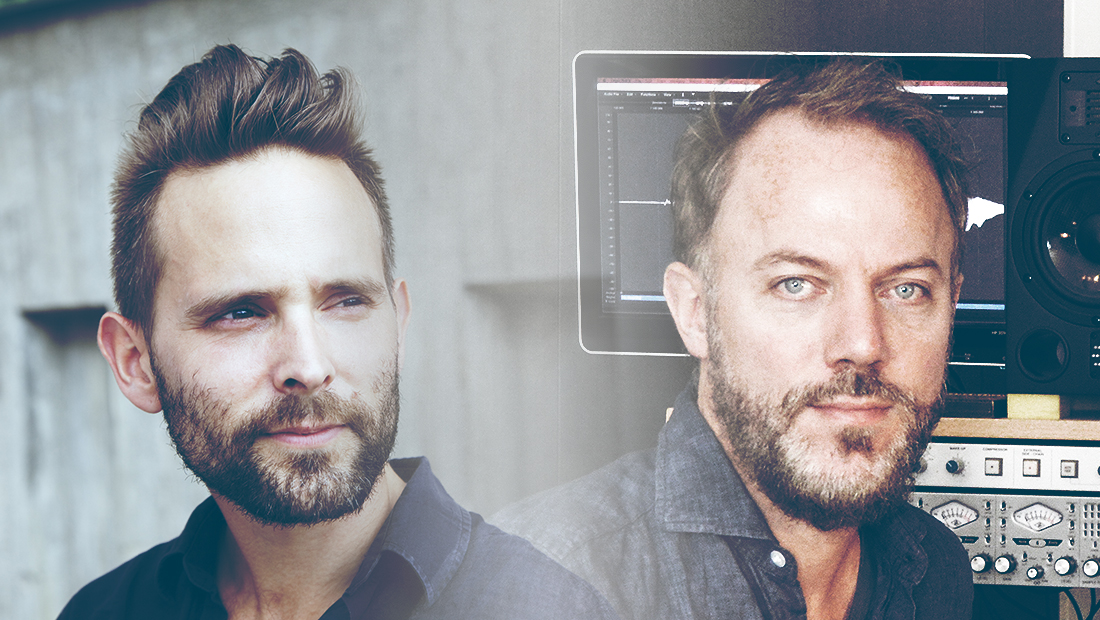 I chatted with Uno Helmersson and Patrik Andren, who I worked with to create the sounds in Zebra Nordsund. They are the composers, along with Johan Soderqvist, for the TV series The Bridge, and we talked about how they go about writing for such an intense, long-running series.

And they also give some insight and advice on writing music and working in television.

Hello guys. How does it feel that The Bridge is coming to an end?
Uno: A relief, together with a slight feeling of emptiness. But mostly pride over our collaborative work with the music for all four seasons.
Patrik: We first started working on the music for the season one in 2010 and it has been a fantastic journey to watch it grow. So of course it is a bit sad. At the same time I am very proud of the outcome.

How has working on The Bridge evolved between series one and four? And how has the music evolved?
P: The main sound and expression was created for the first season, together with director Charlotte Seiling, and we have tried to maintain the sound over the years. Having said that we also write new music and themes for every season so, yes, the music has evolved but within the original sound of The Bridge.
U: The big challenge has been to keep and stay in the sonic world of The Bridge. To not lose the core of the music. We always write about 100 mock-ups for each season before we start with the work, and that also continues with creating new music throughout the whole process.

What is the ethos for creating music for The Bridge? What sound are you trying to achieve and what are you trying to express?
U: The approach and the sound of the music was pretty much set in the first season by Johan Söderqvist and Charlotte Sieling, the conceptual director of the series. For example: one thing could be having contrasts in the music, i.e. coming from fast energy drums to a lonely clay whistle. Also the skewness of Saga was part of the approach. And to never go too crime generic.
P: Another thing that we tried to achive is having all acoustic instruments sounding electric and processed, and the electronic sounds usually have a living movement to it, i.e. filters or delays. That is why the Nordsund sounds work nicely. Rhythmically we agreed to use a Wavedrum, which is a non-midi electronic drum pad with crazy sounds. So many of the rhythms are not entirely tight. It actually sounds quite bad at times, which we like!

How do you start writing a cue? And how do you know when a cue is finished? After four series, have you developed a routine or a process for writing new cues?
P: We write many sketches in advance for each season and then adapt them to fit the scenes. I think being well prepared is the key when working on a series, where you don’t have much time for each episode.
U: Working collaboratively with the series has provided a great experience in the process of writing for a TV series. This process probably looks a bit different in Scandinavia, to maybe those in England or the US, but we sure have got a routine on writing the music.

How do you split the cues when there are three of you working on the score? Is there any process where you work on the same cues?
U: We were very pragmatic on splitting the cues for each episode. Since we have different skills, we shared the cues depending on those skills, then we also shared the cues depending on what work load we had independently.
P: Often we work all three of us on the cues, sending files and documents back and forth. That is an important factor to why the music sounds like it does, it is made from three different brains. And for The Bridge, it works nicely since the music is askew and weird a lot of the time.

You mentioned to me that you also work as music editors on the show; how does that work and does it make you approach writing the music differently?
P: That is part of our scoring process. It is still a fairly low budget production, internationally speaking, without the luxury of music editors, so we spend lots of time putting the music to picture and when it feels ok we go back and rewrite it so it fits the scene.
U: Generally speaking I would say that we spend a lot of time with music editing on the different episodes. Each of us makes suggestions on dramatising the scenes with music and finally we agree on a final version together, with the director. After that we start working with the specific cues until we deliver the music for each episode.

What are the biggest challenges of working on a long-running TV series?
P: It is maintaining the original sound, I think. Also working for a longer time under intense stress is a challenge.
U: The biggest challenge is the delicate balance between being faithful to the form/sonic soundscape and still being creative enough to think out of the box to do magic and extraordinary music. It’s a thin line!

Have you any tips & tricks, or good lessons, for writing music for TV drama?
U: Always stay alert. Be aware. Trust your instincts (that’s a commercial, isn’t it?).
P: A less positive conclusion is that it never gets any easier. You hopefully get better but, it is never easy. And if it is easy, it is probably not good. Another thing I can recommend is to pay more attention to the sound and the expression of the music than the actual notes. Or at least pay the same attention to both sides.

How did you both get into writing for television and film?
P: We both owe the third party of this trio, Johan Söderqvist, thanks for that; as a professional that is. I studied film scoring at Berklee College of Music in Boston and then, after a decade of freelancing as a musician, I contacted Johan and started assisting him on his films.
U: When I studied at the Royal College of Music in Stockhom, I had a teacher in string arrangement who noticed my works, and that knew Johan Söderqvist – so he told me to contact Johan. I did so, and then I worked for him a couple of years as a composer assistant before we started to work as equal colleagues, as we do on The Bridge.

What are you working on currently/next?
U: Right now I’m working on two exciting projects – a feature documentary and a motion picture.
P: We all work on different projects in between and I am currently working on the latest DLC for the game Battlefield, together with Johan.

What burning musical ambitions remain unfulfilled?
P: They are many, but I would say as long as you get some rest in between projects it is fantastic to be able to work with music for film. Also to work with great people such as Uno and Johan is a privilege.
U: Oh, there’s plenty of them. I would like to write an opera, a violin concerto, make a couple of records, among a lot of others.

What favourites bits of gear and software have you been using on The Bridge?
P: Zebra, of course. But this is a soundtrack where we make most of the sounds ourselves from scratch. I would say I am still in love with Logic X. Not sure it’s cool to say that! Also the Wavedrum has been great in this score.
U: Well, theres a lot of them, but my favourite is a self built lapsteel made from a mahogany bench from a church in the rural parts of northern Sweden. It is a trade secret, well, not anymore! Onto software… I tend to use Zebra a lot. But also Xils, Reaktor, Omnisphere, among others.

What has it been like having bespoke sounds made for the series by The Unfinished?
U: It has been awesome! Im truly impressed by the programming of each sound and the richness that is added on with the performance. Amazing.
P: Since you gave us an early peak of your sounds, I think they have worked nicely in the context of the original sounds. They are weird, which I love, and they are easy to work with.

What new sounds would you like to see from The Unfinished?
P: A really dirty noise library would be great.
U: A library of ”London Fog” would be cool. I imagine that it would contain patches with a small amount of randomness. Soily sounds; cloudy, cool. Somewhat suppressed motions.

Suppressed, soily, noisy, London fog. Got it! Thanks for talking to me guys and giving us such a fascinating insight into your music and creative processes.